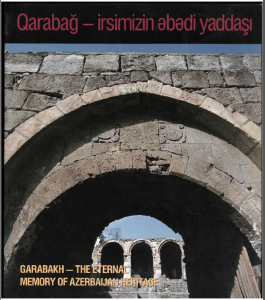 The book is called “Garabakh – eternal memory of our heritage” and was published by the initiative of Ministry of Culture and Tourism of Azerbaijan. The book contains over 300 colored illustrations and photos of monuments all located in the occupied territories. Not only architectural monuments but also archaeological objects and plastic art examples are expressed in the book. The materials are presented following the certain Azerbaijani regions they belong which are under Armenian occupation presently. The book is also provided with illustrative materials about the most grandiose monuments. Finally, the book presents glossary concerning historical personalities as well as the list of historical-cultural monuments described in the book. The book has been published in Azerbaijani and English languages. The book will play great role in acquaintance of the country and international community with the Azerbaijan cultural heritage and will be a very important source for conducting monitoring on the following situation. Ministry of Culture and Tourism of Azerbaijan is planning to publish several books on the same subject in future.